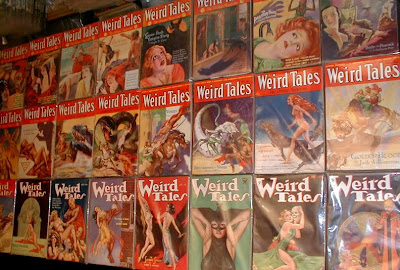 There are few creators who are as enjoyable to collect as Robert E. Howard. His works have been published and adapted in various forms and in numerous media for over eight decades.  Howard items have an incredibly broad range in scarcity and value so that any collector on most any budget can usually find a niche within the hobby that suits their tastes and resources.

Out of all the REH collectibles out there, however, there is nothing – at least in my opinion – quite like the original pulp magazines. To be able to hold in your hands one of these relics of a bygone publishing era and read one of Howard’s yarns as his first generation of fans would have done is a special experience indeed. The primitive line drawings that comprise the interior illustrations, the smell of the pulp paper, the letters from readers arguing the tastefulness (or lack thereof) of Margaret Brundage’s latest racy cover – all these things help to connect the modern collector with that earlier time when Two-Gun Bob was still alive and well and furiously pounding away on his Underwood.


These pulp magazines were considered cheap, disposable entertainment and were not meant to last very long – certainly not for the better part of a century. Due to their fragile nature and the cheap paper on which they were printed, it can be very difficult for the collector to find many issues, especially early ones, in any condition nicer than Good or Very Good (pulp grading standards). It is very important to pay attention to paper quality – brown or brittle pages are often a death sentence for these magazines. When high grade pulps do appear, especially when they contain a work by a popular writer like Howard, they can command very high prices – often multiples of the listed guide value. For this article I will tend to list market prices for books in Very Good condition as that grade tends to be a useful middle-of-the-road benchmark from which to estimate value.

Though his works were published in numerous pulps, the magazine in which Howard appeared most often and with which he is most closely associated is of course Weird Tales. The next two parts in this series will focus on this publication and its collectability. Published monthly beginning with its first issue in 1923, Weird Tales featured stories of speculative fiction with a supernatural or ‘weird’ element. H. P. Lovecraft, Clark Ashton Smith, Otis Adelbert Kline and Seabury Quinn were all contributors in the magazine’s early issues. The first few issues were oversized (referred to as “bedsheets”) and are quite scarce today. Copies rarely come up for sale and when they do they command premium prices in all grades.

By 1924, Farnsworth Wright had taken oven as editor and he would helm the magazine through its "Golden Age” period from the late 1920’s through the 1930’s. The magazine was also reduced to standard pulp size – 7 x 10 inches – and the circulation numbers increased. It was Wright that would give an aspiring young writer from Texas his first professional sale, publishing Howard’s cave man story “Spear and Fang” in the July 1925 issue. This issue is uncommon, but does occasionally come up for sale. It is one of the most collectible of REH pulps and Very Good copies have sold at auction for $1400-1600. Even Good copies can sell in the $500-600 range. I have seen very low grade copies with incomplete covers sell in the $100-200 range.

The following month saw the publication of Howard’s second story, a werewolf yarn, “In the Forest of Villefere.” This issue is also fairly uncommon and Very Good copies tend to sell in $400-600 range. In the February 1926 issue Wright published “Wolfshead”, Howard’s sequel to “In the Forest of Villefere.” This issue is significant for being the first time a Howard story was featured on the cover of a pulp magazine. Noteworthy covers are always desirable and covers that feature Howard stories are certainly no exception. As Howard’s first cover appearance, this issue is certainly one of the most collectible of REH pulps. Very Good copies usually sell for around $600-800.

It would be nearly a year before Howard saw his fourth story in print. “The Lost Race” appeared in the January 1927 issue, along with the H.P Lovecraft story “The Horror at Red Hook.” This issue generally sells for around $300-400 in Very Good Condition.

The years 1927 and 1928 saw a number of Weird Tales issues with poems by Howard as well as a handful of stories. A listing of these works and the issues in which they appear can be found on HowardWorks.com. These issues are a bit more common and can often be found on eBay. They are also considerable less expensive than the earlier issues and usually sell for around $100-200 in Very Good condition – sometimes less if one is patient. One notable exception to this is the February 1928 issue, which includes the Howard tale “The Dream Snake.” This issue often commands prices in excessive of $500 in Very Good condition, though not due to the Howard story; this issue is the first publication of Lovecraft’s “The Call of Cthullu.”

The next Weird Tales issue that should be of special note to REH collectors is the August 1928 issue. This contains the story “Red Shadows” – the first appearance of one’s Howard’s most popular characters, the swashbuckling puritan Solomon Kane. It is also only the second time a Howard story was featured on the cover. Another interesting fact about this issue is that it contains the first published work of a very young “Tennessee” Williams, whose contribution was an historical tale of ancient Egypt, “The Vengence of Nicrotis.” Based on an obscure reference in Herodotus, the story is fairly risqué, complete with an orgy scene, and is not a bad piece of short fiction considering its then unknown author was only a teenager. All of these elements combine to make this a very desirable issue, not only for Howard collectors, but for pulp collectors in general. Prices tend to vary widely on this issue, ranging from $500 to $700 for Very Good copies.

1929 was a prolific year for Howard in the pages of Weird Tales with a story or poem appearing in ten out the twelve issues. Most of these issues are actually quite affordable compared to the earlier scarcer issues or even the later Conan issues. They can often be found in Very Good condition for $150 to 200. Notable issues include January and June with the Solomon Kane yarns “Skull in the Stars” and “Rattle of Bones” respectively.

The August issue saw the debut of Kull in “The Shadow Kingdom” followed by “The Mirrors of Tuzun Thune” in September. The August 1929 issue with Kull’s first appearance is something of a “sleeper” issue as far as collectability. It can often be found selling for not much more than the less significant surrounding issues despite the fact that many consider this to be beginning of the sword-and-sorcery subgenre. Very Good copies tend to sell for $250-300. Had "Shadow Kingdom" been the cover story, this issue would likely cost two to three times that amount.

The year closed out with Howard’s longest work to that point, the novella “Skull-Face.” It was serialized in three parts in the October, November, and December issues. Again these issues are fairly inexpensive – around $150 to 200 for Very Good copies.


The following year, 1930, also saw Howard represented in almost every issue. Prices for common issues are about the same as the previous year. The June issue saw Howard’s third cover story, the first half of the Solomon Kane two-parter “The Moon of Skulls.” As such, it tends sell for a bit more than the surrounding issues – around $300-350 in Very Good. Other issues of note are July with the second half of “The Moon of Skulls” and August with another Kane story, “The Hills of the Dead.” November saw the debut of Bran Mak Morn in “Kings of the Night”, a crossover story in which Kull also appears.

1931 saw a number of well-known Howard yarns see print including “The Children of the Night” in the April-May issue and another Solomon Kane story “The Footfalls Within” in September. The Irish renegade Turlogh Dubh O’Brien made his debut in print in the October issue with “The Gods of Bal-Sagoth” and November featured “The Black Stone,” one of Howard’s contributions to what would later be known as the Cthulhu Mythos. A second Turlogh yarn, “The Dark Man,” made the cover of the December issue and was Howard’s fourth cover appearance. These issues tend to for about $150-200 in Very Good, with "The Black Stone" and "The Dark Man" issues sometimes selling for more.

The following year, 1932 began with two of Howard’s better horror stories, “The Thing on the Roof” in February and in May, one of the earliest (if not the first) examples of what would become the “weird western” subgenre, “The Horror from the Mound.” The July issue contains “Wings of the Night,” the last Solomon Kane story to see print in Weird Tales.

Finally, the November 1932 issue featured one of Howard’s best known and most popular stories, the Bran Mak Morn yarn “Worms of the Earth.” It also featured the first in a series of stunning covers by the legendary illustrator John Allen St. John. St. John is best known for doing many of the iconic dust jacket covers for the Edgar Rice Burroughs books and his work for Weird Tales is perhaps only slightly less famous. Unfortunately for REH fans, St. John was not illustrating “Worms of the Earth,” but rather the first installment of Otis Adelbert Kline’s serialized novel, The Buccaneers of Venus, a sword-and-planet tale in the style of Burroughs’ Barsoom novels (later published in book form as The Port of Peril). This issue tends to sell for around $200-250 in Very Good condition.

For Howard collectors there are a number of great Weird Tales pulps from this period of his career, many surprisingly affordable especially in lower grades. It is possible to acquire a number of these pulps with Howard stories in their very first printed form for less than what one would pay for some of the numerous modern limited editions. Some of the early issues are quite scarce, however, and do command top dollar in all grades, but there are always bargains to be had if one is diligent and patient
For fans of weird fiction these early issues also chart the birth and development of the genre as H. P. Lovecraft, Clark Ashton Smith, Seabury Quinn, Frank Belknap Long, and of course Robert E. Howard honed their craft. In the next installment of this series I will discuss the subsequent phase of Howard’s tenure at Weird Tales from a collector’s standpoint, beginning with the December 1932 issue and the first appearance of a certain Cimmerian.

Acknowledments:
All but two of these images are courtesy of a long-time private collector who graciously allowed me to use them for this article (thanks BZ). The exceptions are the August 1928 and the December 1931 issues which are my own.
Posted by Jeffrey Shanks at 4:43 AM