Introducing An Age Undreamed Of... 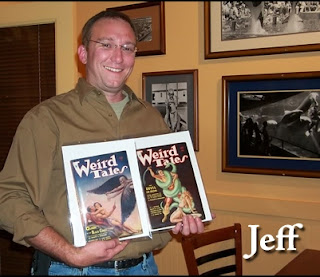 Let me provide a little background about myself. I'm an archaeologist and a historian with an avid interest in ancient cultures and mythology. But I also have a fascination with late nineteenth and early twentieth century popular culture, particularly examples of what some might consider “low-brow” pop culture – dime novels, pulps, comic strips, etc. I have always enjoyed reading good, rousing adventure fiction, but, even as a child, the speculative genres of fantasy, science fiction, and horror were my favorites. I'm also a collector of various of various pop culture media, particularly books, comics, and pulps.

In the last few years I have become more involved in popular culture studies, particularly related to 1920s and 30s pulp fiction. The primary focus of my research has been on the work of Robert E. Howard, best known as the creator of Conan the Cimmerian, but I am also interested other pioneers of fantasy, science fiction, and horror, such as Edgar Rice Burroughs and H. P. Lovecraft. I was previously a contributor to The Cimmerian blog and have written both scholarly and popular articles for several venues such as The Dark Man: The Journal of Robert E. Howard Studies, REH: Two-Gun Raconteur, and Comic Book Quarterly. On this blog I will be sharing my observations, my research, my occasional random thoughts on various topics related to popular culture though it will tend to be comic and pulp-centric. In addition to posting new material I will also occasionally post revised versions of some of my previously published work.

Finally let me close this introductory post with a word on the title of this blog. Fans of Robert E. Howard and Conan likely know the reference immediately, but for those who don't it is taken from the opening lines of the first Conan story, "The Phoenix on the Sword," which was published appropriately enough eighty years ago this month in Weird Tales magazine:

“Know, oh prince, that between the years when the oceans drank Atlantis and the gleaming cities, and the years of the rise of the sons of Aryas, there was an age undreamed of…”