Adventures in Pulp Culture: The Year in Review 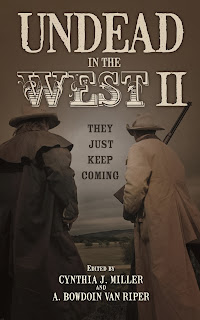 This has been a great year for me in my ongoing quest to promote pulps and comics in cultural studies and I thought it might be a good time to take a look back at my 2013 escapades.

Let me start with a plug for my lastest publication that hit the shelves last month. My buddy Mark Finn and I co-wrote a exhaustive article entitled "Vaqueros and Vampires in the Pulps" discussing the weird westerns of Robert E. Howard and his role as a pioneer in that popular hybrid genre.

The article appears as the opening chapter of the collection Undead in the West II: They Just Keep Coming from Scarecrow Press. This is a really fun book -- not a dry academic tome -- with an introduction from the legendary SF author Willian Nolan (Logan's Run) and articles on Joe R. Lansdale, Stephen King, The Walking Dead, and other icons of the weird wacky west. Check it out here.

More after the jump. 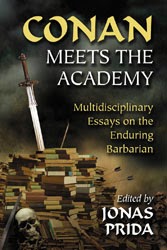 I had two more scholarly articles appear earlier this year as well. The first was my article "Hyborian Archaeology:  Unearthing Historical and Anthropological Foundations" that appeared in the collection Conan Meets the Academy: Multidisciplinary Essays on the Enduring Barbarian from McFarland Press. More info here and you can check out Brian Murphy's review here.

In this I discuss Howard's use of then current ideas on history, anthropology, geology, and archaeology as the framework for his world-building (much as Tolkein used mythology and philology) -- a topic which I plan on expanding into a book-length treatment in the near future. This article won the 2013 Hyrkanian Award for Best Essay from the Robert E. Howard Foundation, an honor for which I am extremely grateful. 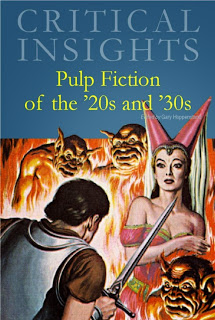 In May, my article on Robert E. Howard's development of the sword and sorcery genre, "History, Horror, and Heroic Fantasy" appeared as the opening chapter (there's a pattern here) in Critical Insights: Pulp Fiction of the 1920s and 30s. This volume from Salem Press is edited by Gary Hoppenstand, one of the leading scholars in popular culture studies and the longtime editor of the Journal of Popular Culture. Along with my chapter, there are contributions from renowned H. P. Lovecraft scholar S. T. Joshi and the 2013 Munsey Award winner Garyn Roberts. The Critical Insights series is aimed at introducing students to the latest critical scholarship in various literary areas, in this case early 20th century pulp ficition.

I also hit the convention and conference scene this year, beginning with the Popular Culture Associaction National Conference in Washington D.C. last March. Mark Finn and I have have been regulars in the Pulp Studies area for the last several years and this year we were joined by our fellow Howardists, Rusty Burke and Chris Gruber. You can can read about our exploits in my trip report, but suffice to say the Pulp Studies Area is blowing up at PCA. I am now the co-chair of Pulp Studies and so have the opportunity to take a more active role in shaping the subject area at PCA in the future. We're already looking foward to an amazing line up for the 2014 conference in Chicago.

Next up was Robert E. Howard Days in June. Again you can read more in my trip report at the REH: Two-Gun Raconteur blog. This was a great Howard Days. The theme was REH in the comics and the guest of honor was the legendary Tim Truman, current writer of the Dark Horse King Conan series. As a special bonus, Tim's frequent collaborator and partner-in-crime, Joe R. Lansdale showed up as well. Getting to hang out and be on panels with Joe and Tim in the hometown of Robert E. Howard. was a helluva good time and made for a Howard Days that won't soon be forgotten.

In August I attended the Tampa Bay Comic Con where the organizers asked me to moderate some panels. I spent much of the time hanging out with Hugh Howey, author of the NY Times best-selling WOOL series, a post-apocolyptic SF hit that I highly recommend if you haven't checked it out yet. I also had dinner with actor Chad Coleman (Walking Dead, The Wire) who was an absolutely engaging and interesting individual.

The following week it was off to Worldcon in San Antonio for a week-long extravaganza of nerdery and debauchery. I was on a dozen panels, including one in the academic area where I gace my PCA paper again. I helped set up and man the Robert E. Howard booth in the exhibit hall, bringing many of my own pulps and first editions for display. Therewas  a big emphasis on Howard at the convention since he was a Texas writer and it was great to finally see him getting some of the recognition he is due from the SF fandom elite.

The highlights of the week included visting with buddy Roger who is a local San Antonio comic and art collector and perusing his amazing collection (Frazetta, BWS, Jeffrey Catherine Jones, Eisner, Corben -- you name it!), getting to meet George R. Martin, drinking with "The Hound" (Rory McCann) from Game of Thrones, and finally getting to hang out and party with longtime correspondent Patrice Louinet, the editor of the Del Rey Conan series. Patrice and I had a blast all week and it was a really great time and an amazing experience.

After that I needed a break, but there are plenty of exciting new projects on the horizon, including my article of the Mexican Conan comics from the 1950s and 60s being published in the December issue of Foreign Comic Collector magazine.

One of the projects I'm most excited about is a collection of critical essays on Weird Tales magazine with Justin Everett. This will be a part of S. T. Joshi's Studies in Supernatural Literature series from Scarecrow Press and should be out by the end of next year if all goes well. This is a book that I have had in mind for some time and I have assembled an outstanding list of contributors, including some longtime pulp scholars as well as some of the newer, younger academics that have been giving papers at PCA.

I'm also going to be working on a illustrated Conan encyclopedia and a gazeteer of Howard's boxing universe (yes, that is a thing) with several other noted Howard scholars. I'm also in the process of putting together a series of anthologies of pulp reprint stories, beginning with a collection of zombie tales that should be finished after Christmas. Next year should be a great year for pulp studies and for yours truly.

Hope every one has a great holiday season! Posted by Jeffrey Shanks at 5:26 AM