This past week I attended the Popular Culture Association/American Culture Association national conference in Washington, D.C. This was my third time presenting a paper on Robert E. Howard at PCA/ACA and the Pulp Studies area is growing every year. Shortly after arriving at the hotel on the first I found my partner in crime, Mark Finn. For those who don't know Mark is the author of Blood and Thunder, the best biography of Howard out there. We were soon joined by legendary Howard scholar and editor Rusty Burke. Rusty was the series editor for the Wandering Star/Del Rey definitive editions of Howard's stories. The three of us hit the pub, while we waited for the arrival of our fourth dog-brother, Chris Gruber. Grub is the foremost expert on Howard's boxing yarns, and the editor of Boxing Stories from the University of Nebraska Press. After a fairly restrained first night of drinking beer and swappin' lies, we turned in fairly early, knowing that we would have long day on Thursday and that we needed to pace ourselves.


This year we had five sessions and sixteen scheduled papers on topics ranging from confessional pulps to contextual studies of the shudder pulps to Marxist perspectives on the Conan stories to images of anti-fascism in Operator No. 5 to Modernism in Weird Tales to temporal and spatial anxiety in Lovecraft's cosmic horror.

There were a few unexpected changes to the schedule, however. Justin Everett the chair of the Pulp Studies area was unable to attend to due unforeseen circumstances so he asked me to step in and help coordinate the sessions and other activities. Rebekah Brown, a REHupa member was also unable to come, which was very unfortunate as I was really looking forward to hearing her paper on the theme of reincarnation in Howard's stories. Two other panelists with interesting-sounding papers also dropped out at the last minute. But with a few minor adjustments and shuffling of schedules we made everything run very smoothly.

The first paper of interest on Thursday morning was not in Pulp Studies, but in the Famous American Authors area, where Chris Gruber gave a presentation on masculinity in Robert E. Howard's humorous boxing stories. For those who may not know, Chris was not only the editor of Boxing Stories but he is also the co-editor (with Mark Finn and Patrice Louinet) of the forthcoming four-volume Tales of the Ice House: The Collected Boxing Stories of Robert E. Howard from the REH Foundation Press. Chris's session was very interesting as the other panelists were speaking about the erotic stories of Louisa May Alcott (author of Little Women) and the hard-boiled crime fiction of Robert Penn Warren. So the common theme, intentional or otherwise, was the lesser-known genre works of authors that were famous for something completely different. It was something else to see Howard being presented alongside these other "canonical" authors without a bit of condescension. In fact there was considerable interest from the audience during the question-and-answer session afterwards.

Next up was the first panel in the Pulp Studies area. This consisted of three students of David M. Earle, English professor at the University of West Florida, who teaches a series of classes on pulps and periodicals. I met David for the first time two years ago at the 2011 PCA/ACA and I am always impressed with the high level of research that his student demonstrate. This year was no exception as all three papers were engaging and insightful and worthy of publication. And I'll add that these three well-spoken and extremely knowledgeable young women, Lauren Gibson, Emily Sisler, and Rachel Johnson belie the typical picture that many in fandom have of the "crusty, old, boring academic."  These are interested young scholars doing research on topics like the voice of working-class women as seen through the lens of the "confessional" pulps, the correlation of the the Hayes code with the rise of the "shudder pulps," and the rediscovery of lesser-known female writers in the SF pulps. This ain't yer granddaddy's academia, folks.

Following lunch we had our second panel on anthropological and evolutionary themes in the pulps. Chris Gruber graciously agreed to give his paper again for this more Howard-savvy audience in order to fill in the vacancy created by Rebekah's absence. I gave my paper on the influence of certain outdated 19th century anthropological theories on Howard's Little People stories like "Worms of the Earth." And David Schappert gave a paper on the malleability of the body in Leigh Brackett's works.

The next session was all Howard, with the great title of "Sex, Swords, and Sinews!" and predictably the audience swelled in numbers. Pulp Studies regular and University of Nebraska doctoral student Daniel Nyikos gave an excellent paper looking at Marxist and socialist themes in the Conan stories—challenging the old chestnut from SF scholarship that sword and sorcery is inherently fascist. Deke Parsons, recognizing the importance of the pulp magazine Adventure as an influence on Howard, gave a thorough breakdown and deconstruction of one of the issues from the period that a young Howard started reading it. Then Mark Finn brought it all home, concluding with a condensed version of the article on Howard's weird westerns that he and I co-authored for the forthcoming collection Undead in the West II: They Just Keep Coming (look for it around September or October).

In the next session, on politics in the pulps, Jason Carney, doctoral student at Case Western University and contributor to The Dark Man, gave a very insightful paper on Modernism in Weird Tales, a topic certainly worthy of further discussion. He was followed by David Earle, whose students had given their papers in the morning session, and who was able to give an extended version of his own presentation due to one of the canceled papers. David spoke on anti-fascist themes in the pulps, specifically focusing on the legendary "Purple Invasion" story-line in Operator No. 5. Both Jason and David's papers helped demonstrate that the pulps aren't always the the brainless disposable entertainment they are often portrayed as. They can, on occasion, demonstrate considerable ideological depth and social awareness and as such can be valuable cultural artifacts.

In the final panel the audience started to thin a bit as happy hour began to call, but there were still some great papers to hear. Benjamin Wallin demonstrated the hidden literary merit of Cornell Woolrich's 1937 story "Face Work" from Black Mask. I read Justin Everett's paper on temporal and spatial anxiety in Lovecraft's cosmic horror and that was followed by Gabriel Cutrufello who showed that the early letter columns in Amazing Stories demonstrate the presence of a highly knowledgeable and sophisticated fanbase from the very beginning of the pioneering magazine's run.

After the end of all the papers, the Pulp Studies area hosted a screening of The Whisperer in Darkness (2011), the independent film based on the 1931 H.P. Lovecraft story published in Weird Tales. It was shot in black and white in the period style of the early 1930s. There was a very good turn out for the film and after a bit of discussion at the end, it was time to adjourn to the nearby pub to celebrate a long, exhausting, but very successful Pulp Studies symposium.

Friday morning we slept in, recovering from the academic marathon of the previous day and the John L. Sullivan Irish whiskey of the night before. The afternoon was spent talking with certain editors and publishers about several potential projects. There was a very positive response across the board for pulp and Howard-related material and there are now several very interesting upcoming projects on the drawing board that have me very excited. I hope to be able to say more in the coming weeks.

That evening all of the pulp studies presenters met in the lobby, and Rusty, who happens to be a D.C. resident, led us to a local watering hole for the annual Pulpfeast—dinner and drinks and great conversation. I brought a few of my extra pulps and we drew names and gave them away as door prizes. It was a great time and a wonderful way to wind down an awesome conference. A big thank you to all those who helped make it such a great experience and I'm now looking forward to the 2014 PCA/ACA in Chicago (and hoping that it will coincide with the Windy City Pulp Con!).

Now I'll leave you with a few pics from Pulpfeast! 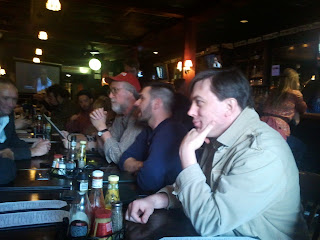 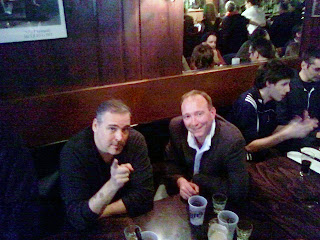 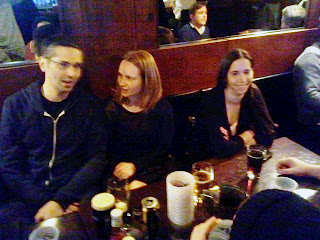 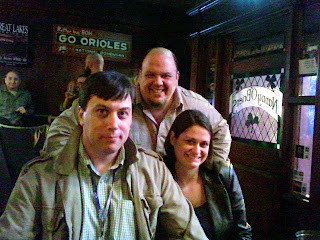